Specialized's Ambush helmet has long been a favorite among mountain bikers – the previous version was light, well ventilated, and didn't look too outlandish. Version 2.0 aims to keep that trend going, although this is much more than a slight revision. The Ambush received a complete overhaul, and it's really only the name that's the same.


The overall look isn't that far off from the recently released Tactic helmet – the larger vents on the side of the Ambush are what visually set the two helmets apart. The Ambush's visor is fixed in place on each side and at the top of the helmet, and is designed to break away in the event of a crash. If it does break away, and assuming the rest of the helmet hasn't been damaged, it's easy to pop back into place.

The Ambush is equipped with MIPS SL, which uses a plastic slip plane on the back of each pad. Rubber bands attach the pads to the inner portion of the helmet with velcro. It's a less bulky, and quieter, solution than the less expensive version that uses a sheet of plastic with pads mounted on top of it. The concept remains the same, though – the plastic is designed to allow the helmet to move more freely during a crash, reducing the amount of rotational forces. 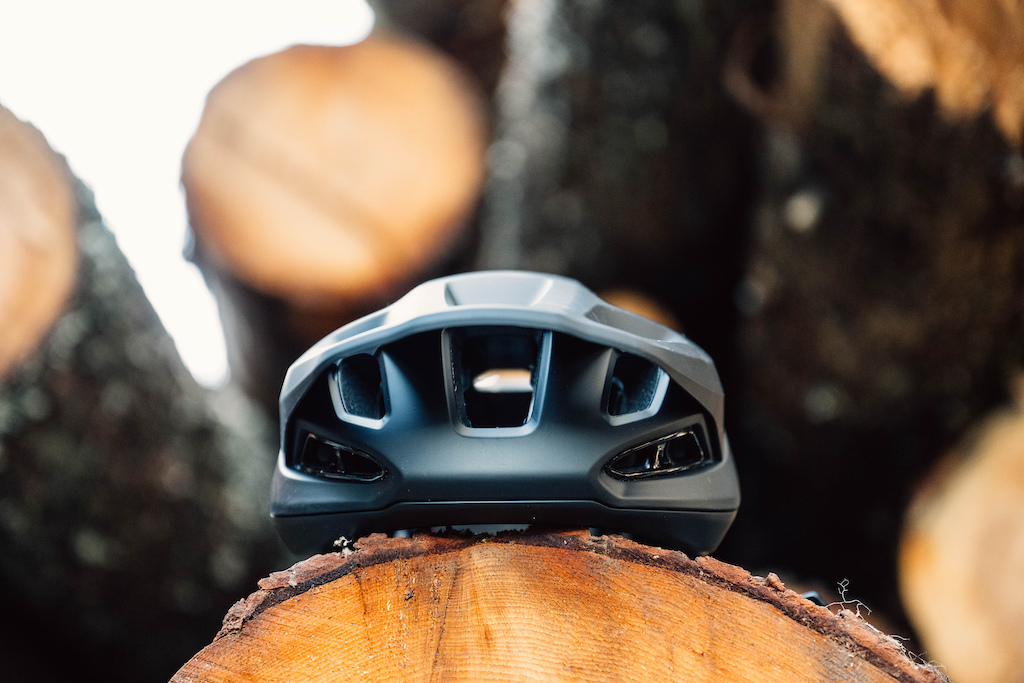 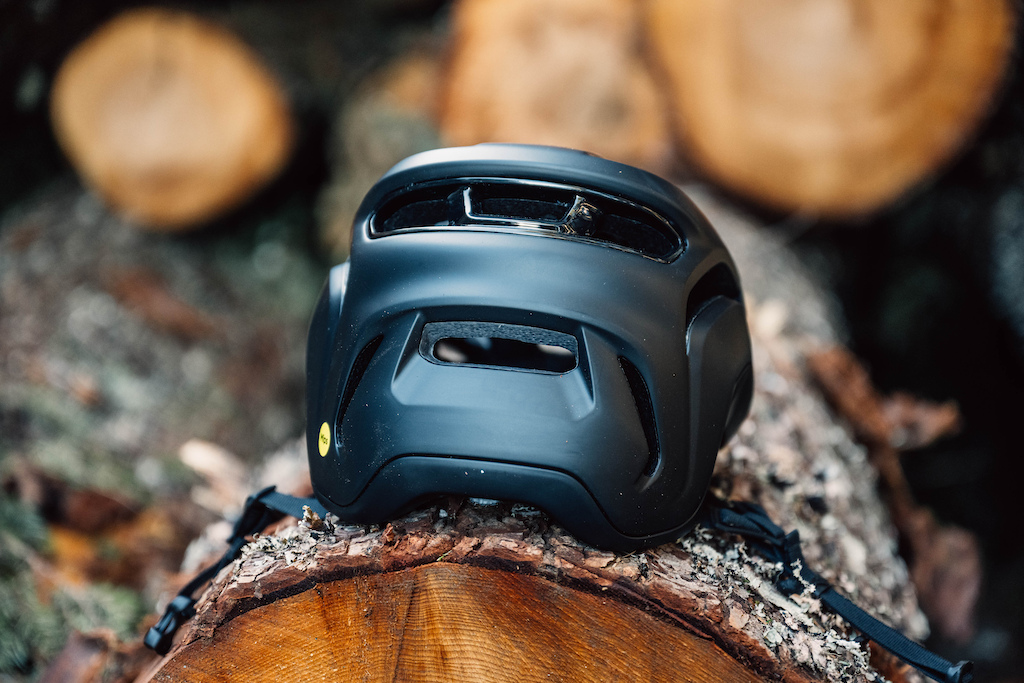 Dual density EPS foam is used to provide the bulk of the helmet's impact protection, and the entire outer portion is covered with a layer of plastic to help keep it from getting damaged by errant branches, or during transport. The Ambush received a 5 star rating from Virginia Tech, the highest rating possible. According to Virginia Tech, their tests are intended to “evaluate a helmet's ability to reduce linear acceleration and rotational velocity of the head resulting from a range of head impacts a cyclist might experience.”

A ratcheting dial that's mounted into the back of the helmet is used to adjust the fit, and there's a 5-position 'Occipital Base Adjustment' that changes where the front of the helmet sits in order to ensure there's enough room for glasses and goggles. Speaking of glasses, the Ambush has one of the most secure sunglasses holding systems around. Flip the glasses upside down, stick the arms in to the outermost vents above the forehead and they'll stay put no matter how rough the trail. Little rubber flaps in each vent increase the security even further, and also keeps the arms from rattling around against the helmet.

The Ambush is available in available in sizes S, M, and L and retails for $180 USD. My size medium helmet weighed in at 360 grams. 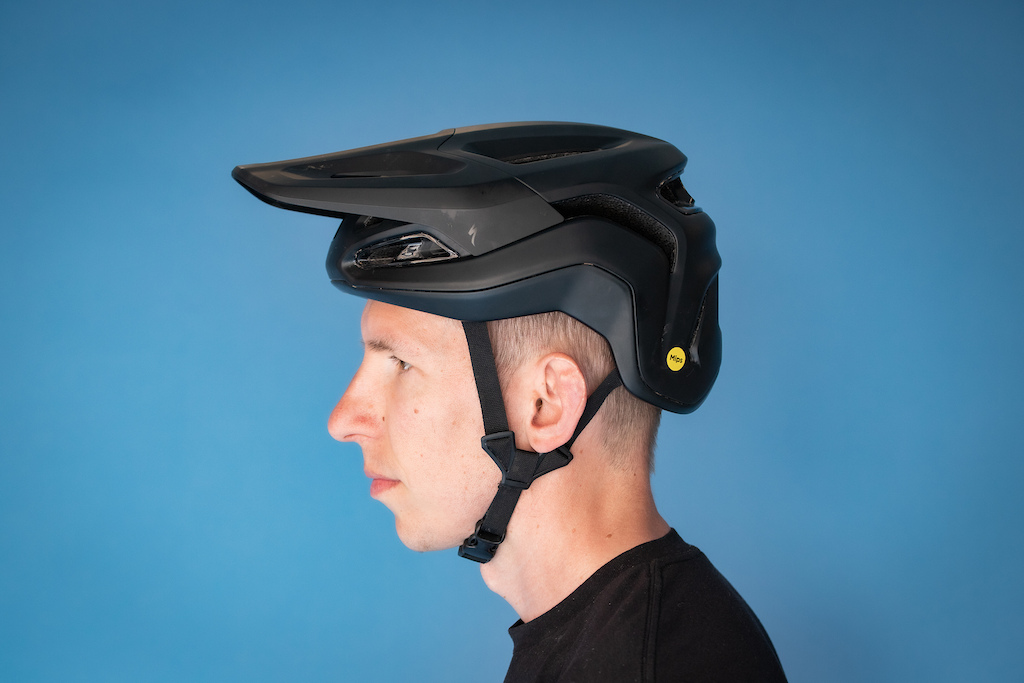 The position of the Tri-Fix splitter is adjustable - it can be slid forward or back to keep the strap from digging into a rider's ears. 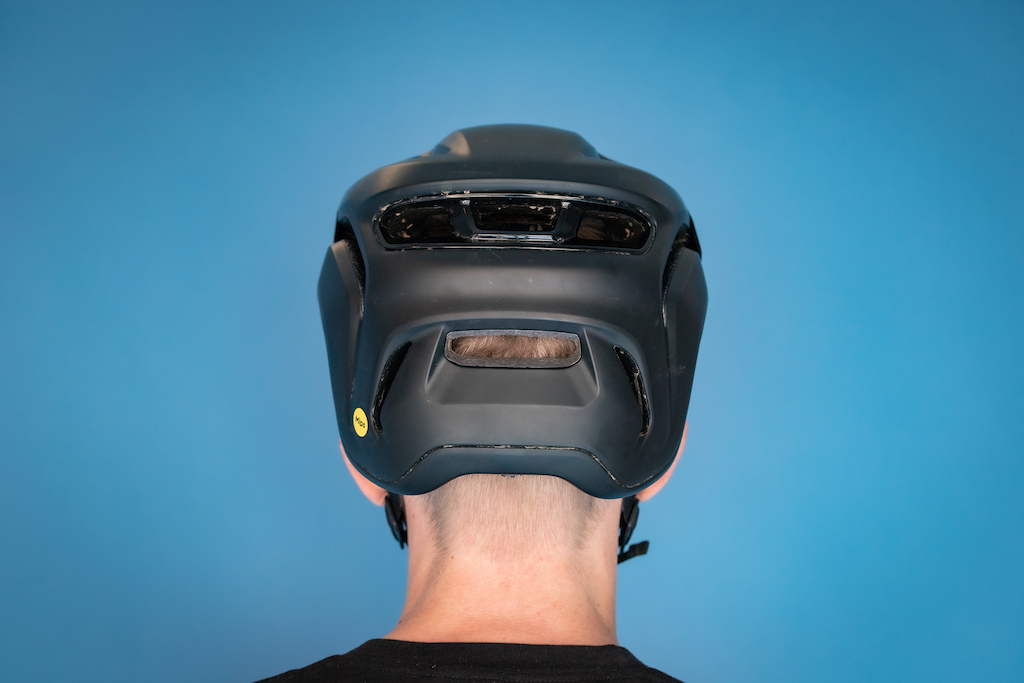 A ratcheting dial is integrated into the back of the helmet, and can easily be operated with one hand to adjust the fit around the head.

The previous Ambush sits at the top of my all-time-favorite helmets list, which means the new version had a very high bar to clear. As far as the overall fit goes, it's comfortable, although not quite as invisible as the previous version – that one cradled the back of my head a little better, and it felt a little lighter, even thought this new version isn't that much heavier. If I was going to hand out a report card on comfort, the previous version would get a solid A, and this new one would get a B+. Of course, fit is a subjective thing, and there's a wide range of head shapes. For what it's worth, my head shape is more watermelon than beach ball, and measures 57 cm in diameter.

The adjustment dial at the back of the helmet is easy to use on the fly, and the base adjustment is a quick and easy way to get the helmet sitting in the right place. 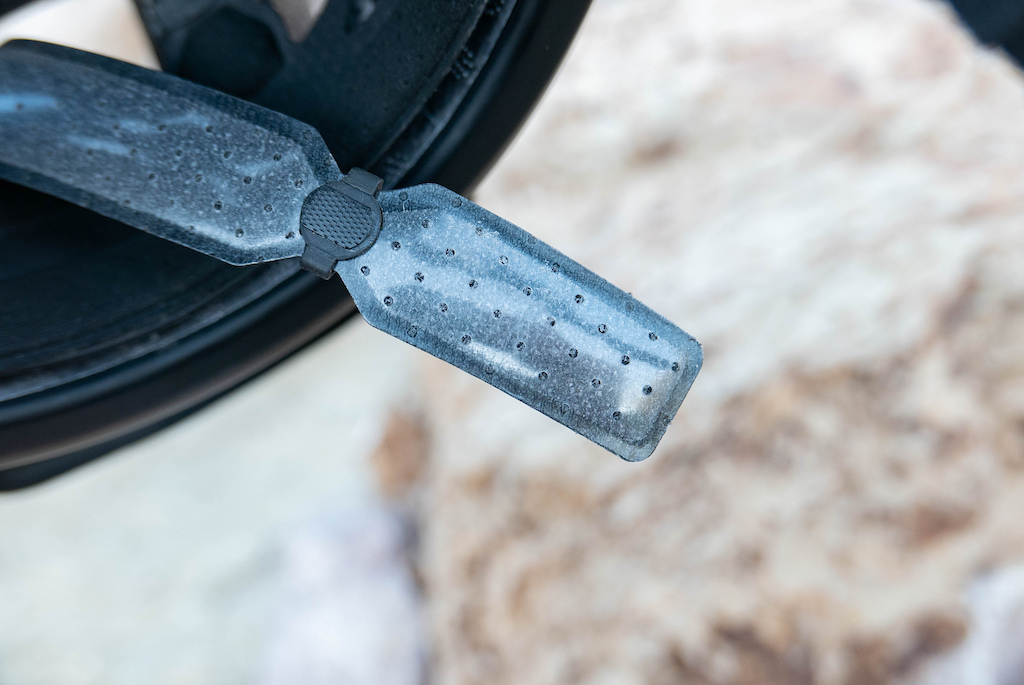 The MIPS SL system places the plastic slip plane on the back side of each pad. 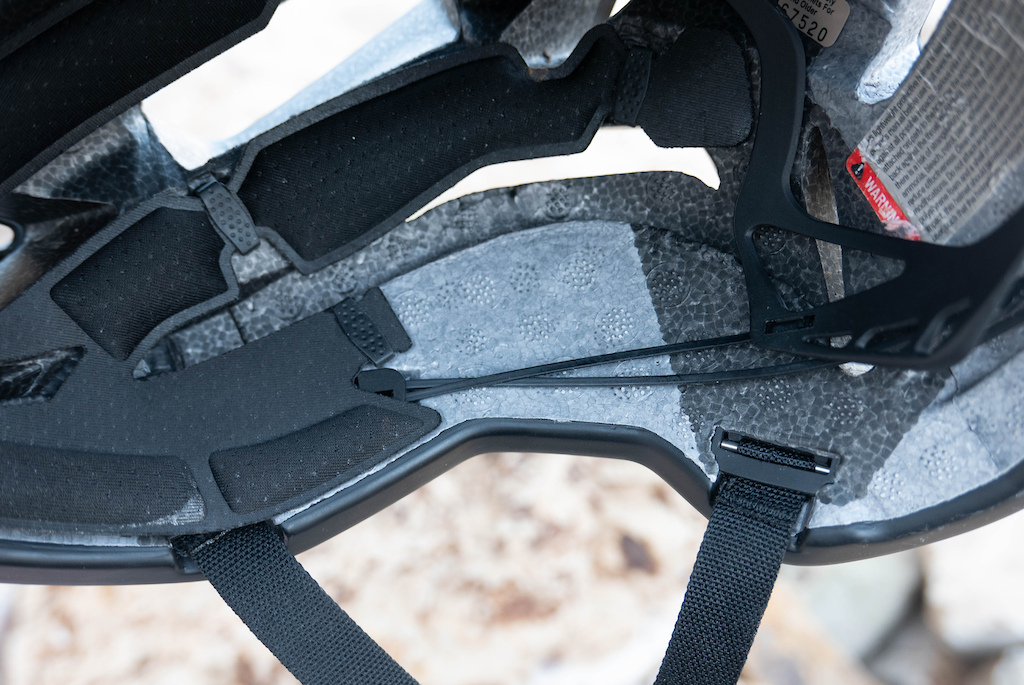 Part of my testing took place in Tucson, Arizona, where temperatures hit the mid-80's (29 C). That's about the maximum temperature I can handle before I start to melt, and the Ambush performed well throughout it all. Airflow throught the large front vents was noticeable, and even at slower speeds I never felt like I was overheating, at least not due to the helmet. The brow pad isn't overly thick, but it did its job, and I didn't have any trouble with sweat dripping into my eyes or onto my glasses.

Does the Ambush's visor actually do anything, or is it there purely for fashion's sake? In the name of science, I aimed myself at the sun and removed the visor, and then put it back on again. It turns out, it does block at least some of the glare, although it could obviously block some more if it had downward adjustability. I can see this being a polarizing feature, but for me, I'm fine with where it is – on most helmets I'll raise the visor until it's out of my field of view and never touch it again. 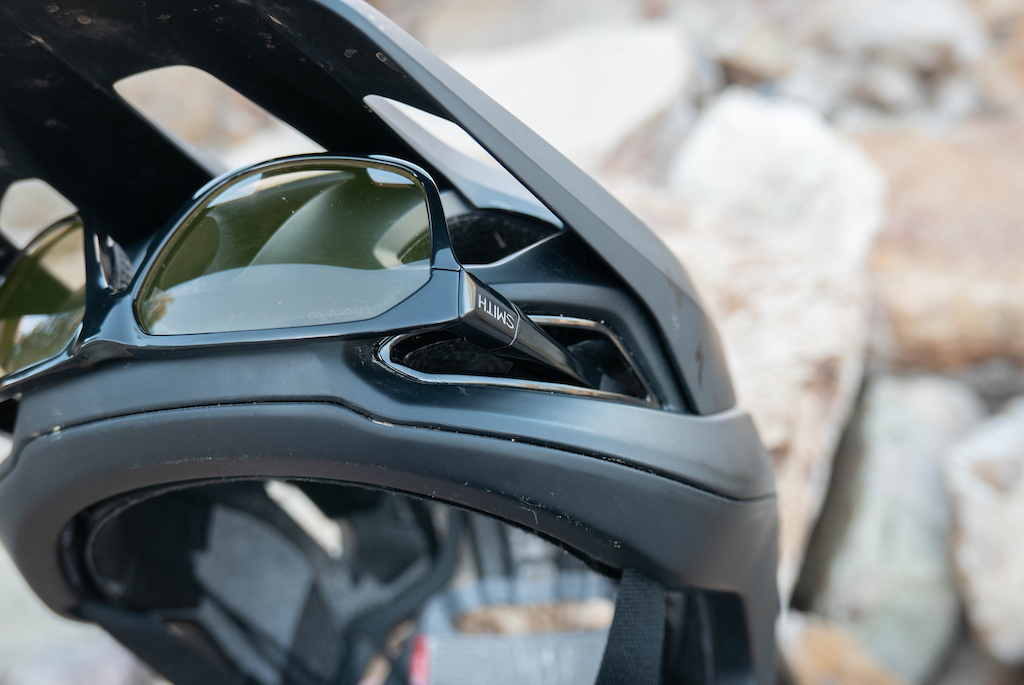 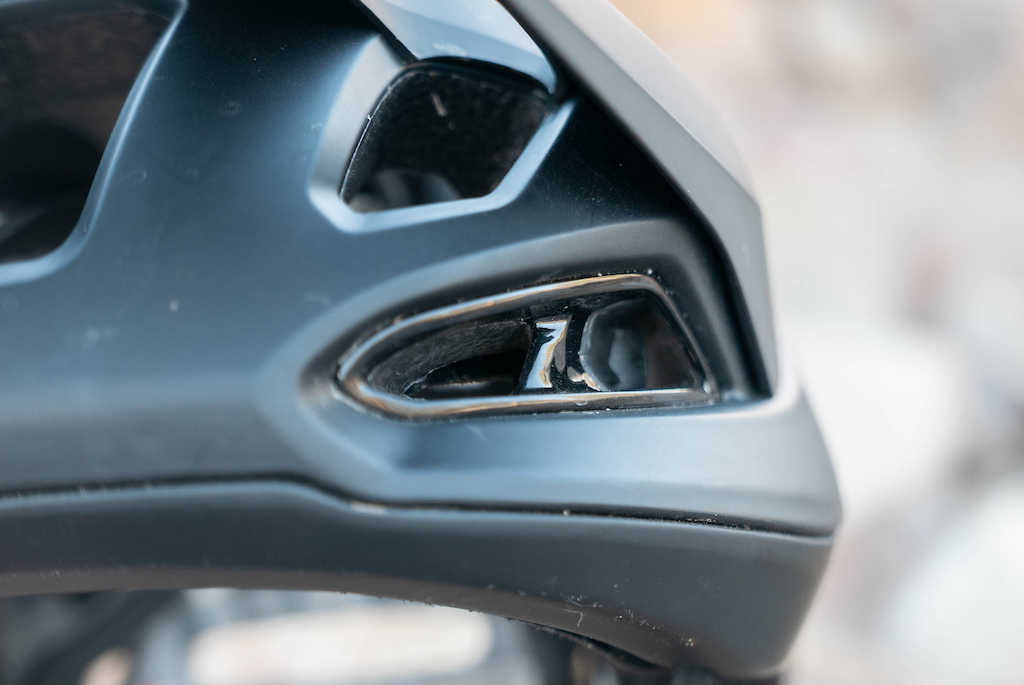 A small plastic flap keeps the sunglass arms from rattling around when they're being stored.

I may not be a visor fiddler, but I do constantly remove my sunglasses (well, they're more like safety glasses in the Pacific Northwest) before a big climb to keep them from fogging up. The Ambush's storage system is hands down the most secure that set up that I've encountered It sometimes took a couple tries to get the glasses into the right slots, but once in place they're not going anywhere. I made sure to do some aggressive headbanging (thank you, Pantera), and the glasses never budged. It's a clever feature, and one that so many other helmets don't get right.

The Ambush's weight is in line with other helmets in this category, and in some cases is a fair bit lighter. The same goes for the $180 price tag - it's not the most expensive, or the least expensive high-end helmet out there. At 360 grams, the Ambush's weight is the same as the recently released Giro Merit helmet ($220), 20 grams lighter than a Fox Speedframe Pro ($170), and 55 grams lighter than a Troy Lee Designs A3 ($220). 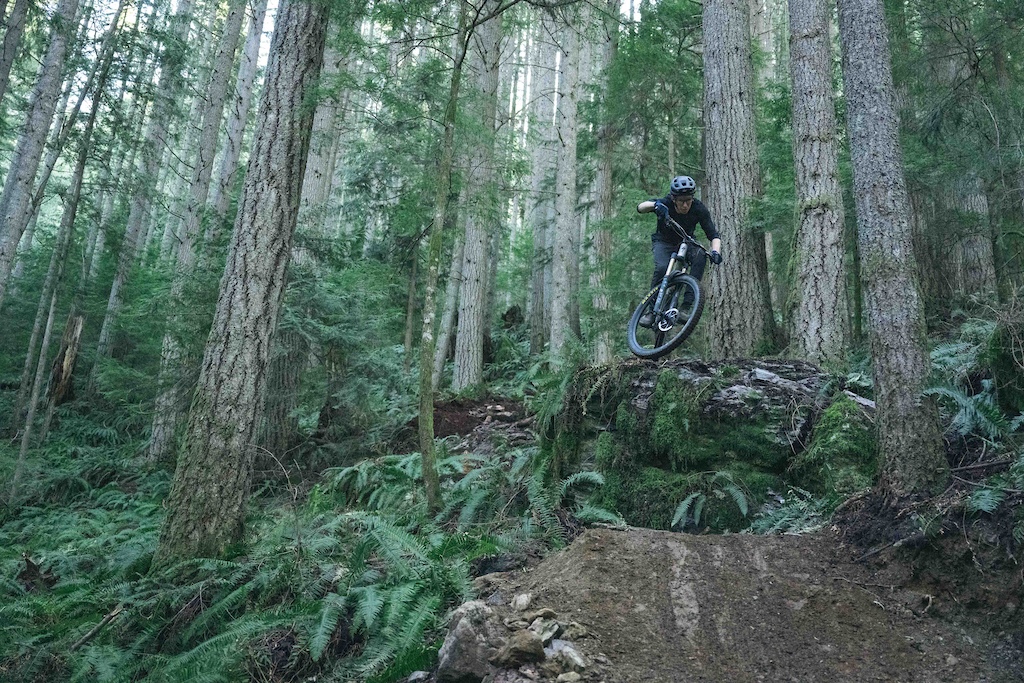 - Non-adjustable visor won't be for everyone.
- Not as light as the previous version

"The new Ambush has all the traits you'd hope to find in a modern, high-end trail helmet. There's a wide range of adjustability, good safety features, plenty of ventilation, and the best sunglasses retention around. Its level of comfort doesn't surpass that of the original, but it comes close enough that I'm okay with retiring my well-used (and sort of smelly) Ambush 1 and letting version 2.0 take over."
— Mike Kazimer
Share:
Share on Facebook Tweet on Twitter Share on LinkedIn Pin on Pinterest
Previous article Wahoo KICKR Bike Review
Next article Review: Rapha's Trail Pants - PinkBike